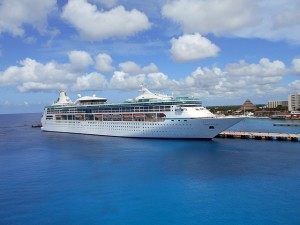 The Caribbean continues to be the most popular cruise destination industry-wide, accounting for more than a third of the cruise business globally. An estimated 60% of cruise passengers are repeaters, which heightens the need for the Caribbean to constantly re-invent itself and for cruise lines to find or create new ports of call that are rich with attractions.

Trujillo offers an abundance of natural attractions: rugged mountains, a lush tropical rainforest, beautiful beaches, rivers and waterfalls and exotic wildlife.  There is a rich historical past dating back to Columbus’s landing in 1502.  Trujillo is also where the first Catholic mass was celebrated. History and nature are reflected in dozens of current excursions like river tubing and zip-lining.

A new airport is opening in Copan, allowing visitors to have the option of an easy trip from the Roatan port to Copan Ruinas, the Mayan archaeological site and one of the country’s principal tourist destinations.

Carnival Corp. participated in developing this new $85 million port.  This means a return of regularly scheduled cruise ships to the north coast of the Dominican Republic, which hasn’t been a regular cruise stop since the 1980s. Built to accommodate super-size ships, thirteen ships across six Carnival brands (including newcomer Fathom) are expected to make 57 port calls, delivering 350,000 cruisers to the Puerta Plata area in its first year in operation. This new port is the destination for bi-weekly “social impact” cruises from Miami by the Fathom brand.  Costa, Cunard, Holland America, P&O Cruises and AIDA also visit here.

A 25-acre complex near the town of Puerta Plata is being billed as one of the biggest Caribbean ports of the decade and features a water attraction  and transportation center, a craft market, restaurants and bars.  In addition to a spacious pool area with a swim-up bar and waterslides, there will be zip lines and private cabanas.

The complex’s main role will be as a gateway to the region’s historic sites, beaches and adventure activities. More than 40 organized shore excursions will be available from this port.

This is Norwegian Cruise Line’s new $50-million eco-friendly port built on 75 acres on two adjoining islands and is scheduled to open in mid-February 2016. With docking/tendering facilities for visitors as well as a separate tender dock visitors are connected to mainland and island tours.  There will be a floating pier, a marina, an island village and a lagoon and beach for water sports.

Though the primary users of the port will be Norwegian ships, other ships will also be welcome.

Working with the Barbadian government, Royal Caribbean is constructing a replacement for the industrial docks currently used by cruise ships. Located within closer walking distance of the capital, the $300 million project has three phases (the first scheduled for fall 2016) and includes the building of two new cruise piers.  Eventually the port will accommodate as many as six vessels from several lines – or four Royal Caribbean’s Oasis-class ships.

There is a $52 million expansion currently underway intended to increase cruise ship arrivals.  Passenger traffic contracts were negotiated with Disney and Norwegian in advance of the project.  The pier has already been lengthened and widened to accommodate larger cruise ships. An adjacent five-acre land-based development called the Tortola Pier Park is expected to open shortly. It will feature commercial, entertainment and green spaces. A boardwalk and a separate dock facility for local excursions are also to be added.

The government has approved proposals to build two new piers at George Town, which currently has only landing facilities for tenders.  The proposals call for piers able to accommodate four ships at once and estimate the costs at $150 million.   However, there has been opposition to the plan and there has been discussion of presenting the plan in a referendum.

If you have any questions or comments, please contact me at:

Contact us to help you have that great vacation.

P.S.  If you enjoy writing, try blogging for fun or a source of income.  To learn how to blog click here and here.