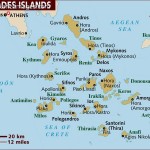 Greece, the birthplace of civilization, or so they say. Yes, there are many archeological sites, lots of museums but most of all beautiful beaches and scenic sites to see and adventures to explore. Greece has many islands, some more tourist-oriented than others. Each has their own history and sites. Santorini is known for its blue roofs, homes built up the side of a mountain, shopping and its beaches. Some people even think Santorini is the lost island of Atlantis.

You can fly to the island but arriving by boat is the best way that provides a spectacular introduction. After the boat sails between Sikinos and Ios, your deck-side perch approaches two close islands with a passage between them. The bigger one on the left is Santorini and the smaller on the right is Thirassia. Passing between them, you see the village of IA adorning Santorini’s northernmost cliff like a white geometric beehive. Crete, to the Greeks, is the Megalonissi (Great Island), a hub of spectacular ancient art and architecture. Crete is the land of King Minos, a unique world where civilization is counted by the millennium.

There are mountains split with deep gorges and honeycombed with caves, rising in sheer walls from the sea. There are snowcapped peaks looming behind sandy shorelines, vineyards and olive groves. There is a beach on Crete with caves know for its hippie residents in the past. Mykonos was one of the poorest islands in Greece turned into one of the richest with the tourist trade. This island was put firmly on the map by Jackie O in the 1960s and remains the Saint-Tropez of the Greek islands. With its whitewashed streets, Little Venice, the Kato Myli ridge of windmills and Kastro, the town’s medieval quarter. The two-or three-story houses and churches, with their red or blue doors and domes and wooden balconies, have been long celebrated as some of the best examples of classic Cycladic architecture. The fourth-largest Greek island and, along with Sicily and Cyprus, one of the great islands of the Mediterranean, Rhodes was considered a bridge between Europe and the East. Rhodes town brings together fascinating artifacts, medieval architecture, an active nightlife, and is reputedly the sunniest spot in all Europe. Don’t miss the beautiful “Valley of the Butterflies” at Petaloudes that can be seen best in July and August. One of the most unspoiled Greek islands, due to the difficulty in getting to it, is Patmos. Rocky and barren, the small island lies beyond the islands of Kalymnos and Leros, northeast of Kos. On a hillside is the Monastery of the Apocalypse, which enshrines the cave where St. John received the Revelation in AD 95. The Monastery of St. John the Theologian sits high on its perch at the top of Chora. It is one of the world’s best preserved fortified medieval monastic complexes, a center of learning since the 11th century and today is recognized as a UNESCO World Heritage Site. The complex consists of buildings from a number of periods: in front of the entrance is the 17th-century Chapel of the Holy Apostles, the main Church dates from the 11th century, the time of Christodoulos (whose skull, along with that of Apostle Thomas, is encased in a silver sarcophagus here), and the Chapel of the Virgin is 12th century.

There is lots to do in Greece from relaxing on the beaches, touring the museums and archaeological sites to shopping. Don’t forget cruising the Greek Islands!!!